On Monday 1 October there is a motion in the Northern Ireland Assembly on Equal Marriage:

That this Assembly believes that all couples, including those of the same sex, should have the right to marry in the eyes of the State and that, while the rights of religious institutions to define, observe and practise marriage within their beliefs should be given legal protection, all married couples, including those of the same sex, should have the same legal entitlement to the protections, responsibilities, rights, obligations and benefits afforded by the legal institution of marriage; calls on the Minister of Finance and Personnel to introduce legislation to guarantee that couples of any sex or gender identity receive equal benefit; and further calls on the First Minister and deputy First Minister to ensure that all legislation adheres to the Government’s commitments to protect equality for all. 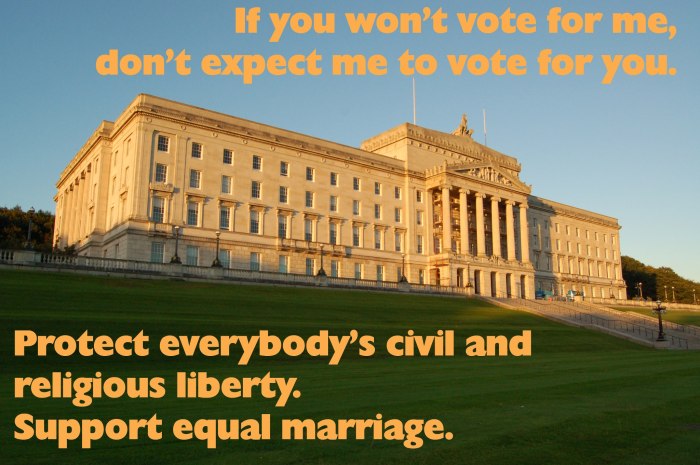 It is important that Northern Ireland does not get left behind on this issue. Immediately after the weekend that has seen many people celebrating the Ulster Covenant which was signed as a response to the proposed Home Rule in Ireland, beginning,

BEING CONVINCED in our consciences that Home Rule would be disastrous to the material well-being of Ulster as well as of the whole of Ireland, subversive of our civil and religious freedom, destructive of our citizenship, and perilous to the unity of the Empire…

let’s hope that the Unionists and others of today will defend our civil and religious freedom by voting in favour of the motion. To do otherwise seems to me to be a betrayal of their forefathers who signed in 1912.

The irony that the debate is in our own Home Rule Assembly in which many Unionists are quite happy to sit is not lost on me.